At least one report indicates that Wayne’s death was the result of friendly fire.

Location of service: North Vietnam, Binh Dinh province
Died while missing, non-hostile action .. air crash at sea .. body not recovered. One shipmate reports that he died from friendly fire.
Aviation Antisubmarine Warfare Technician, Third Class Reinecke was a member of Helicopter Anti-Submarine Squadron 8, Carrier Anti-Submarine Group aboard the Aircraft Carrier USS BENNINGTON (CVS-20). On January 12, 1967, he was a crew member of a Lockeed Viking Anti-Submarine Helicopter (SH-3A) over North Vietnam when his aircraft crashed. His remains were not recovered.
Very little information about the crash is available here: http://www.vhpa.org/KIA/incident/67011222KIA.HTM

I will never forget
I was there with this hero. Same squadron, air crew, flew side by side. Thanks again and again
********************************************************************
Shipmate V-1 Div. USS Bennington CVS-20
Wayne, you picked a strange day to help Clayton after his on deck crash the day before. you went with him because he was your friend and he didn't feel well yet. the only reason for the flight, was a milk run to send mail and pickup up a 1st class petty officer then return. your crew was supposed to be in stand down after your deck crash but they released your crew because it was a simple mission. I was on duty in Prifly Control Tower waiting for your helo to return. I was standing under the speaker when your pilot called Mayday and he said he had failures and was coming in hot. he never made it the ship was close enough. My Division officer saw your help go down and i went out on the side deck to count lights, i only saw 3 out of 5 possible, we launched a SAR helo, without warning and we didn't have control of the SAR they opened fire on the floating helo....my mate you and clayton died from Friendly fire, the skipper was bringing the ship around to pickup the helo and crew. it was found out the next day, that a Ltjg in CIC who had control of the SAR thought you crashed on land and ordered the shooting.that night haunts me now . for your rest and peace of mind i managed to find your sister and Clayton's sister and explained to both families what happened and put the 2 ladies together to help sort and ease your loss. Rest Mate
********************************************************************
Gone From Us, But NEVER Forgotten..............
Went to see you today Wayne as the Vietnam Traveling Wall came to visit here on Oak Island, NC. As a fellow shipmate and the historian for the USS Bennington Association, I remember 12 January 1967, as it was a few days after Bob Hope and his Christmas show were aboard. SH-3A Tail # 149909 from HS-8 aboard the old girl (BENNINGTON CVS-20) went to a watery grave with you and Clayton Kemp. We NEVER had the opportunity to meet but please know that you will NEVER be forgotten as long as there is one member of the ship that remains on this side of the turf. To you and Clayton, "thank you again shipmate" for your service to our country.

48 years ago this tragic event happened but there isn't a 12 January that goes by and you both are not thought of. I'm happy that your sister and Clayton's had the opportunity to meet before. I had always wished that it would happen. As the historian for the USS BENNINGTON Association, I've made sure that the info was added to the Time Line History of the ship for historical purposes. You shall be remembered always 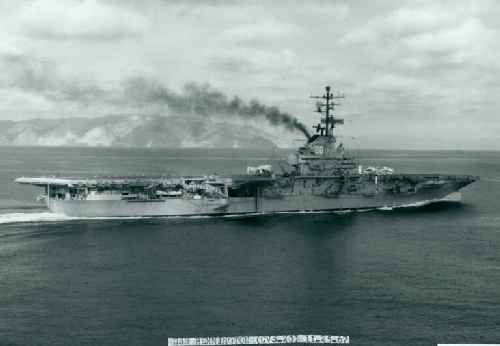