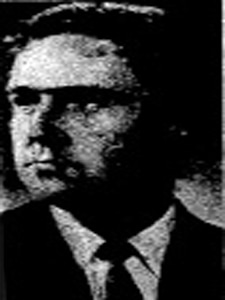 Robert Phillips is the most senior of the Clackamas County Vietnam fallen, and had been serving in the Army for 16 years at the time of his death.

We know from his high school yearbook that he went by “Bob” at that time. He was in the Wild Life Club, the Pep Club, “Productions” (Drama club?), and on the yearbook staff. In the senior class will, we can see he was a class clown, willing his “ability to sleep in all classes” to a couple of friends.

The Oregonian, Sunday, June 19, 1966
Oregon Man War Fatality
The family of Army PFC Robert James Phillips, 2135 Madison St., Milwaukie, learned Friday that he was killed in action in Viet Nam, June 9. The circumstances of his death were not available.
This latest fatality puts the Oregon death toll in Viet Nam at 32 this year and 46 since 1960.
A graduate of Ogden Meadows High School in 1948, PFC Phillips was born in Woodburn Jan. 8, 1930. He enlisted in the Army in 1950 for a career. He served in the Korean conflict and then went to France in 1955. He was married to a French girl there in 1956 and returned with her to the Portland area in 1958. He was sent to Viet Nam in January, 1966.
Survivors include the widow, Vivian; one daughter, Linda, 9; and a son, John, 8 months, all at home; a sister, Virginia McClain, Portland; parents, Mr. and Mrs. Park Phillips, Milwaukie; and grandmother, Mrs. R.L. Thompson, Woodburn.
Funeral arrangements are pending at Bates Southgate Chapel in Milwaukie.
​