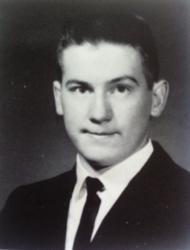 
These remembrances were left here: http://www.vvmf.org/Wall-of-Faces/35979/JOHN-A-MACDONALD

When I was in Washington, DC many years ago I went to the Viet Nam memorial looking for his name; I tried and tried to find it but could not--so just took a photo of a small section of the monument to remember the moment. When I got home and developed my film, I could hardly believe my eyes---there in the far right of the photo was the name "John Alan Macdonald." I have no doubt I was led to the exact spot on the memorial where his name was carved. Ever since then I have wondered how John and I were connected somehow.

I brought his name up at a family gathering this Thanksgiving and asked if anyone knew him---his dad Frank's brother Jimmy said that Joh was a very quiet young man...that his parents found out about John's death by seeing it on TV....it broke their hearts beyond belief to lose their precious son, and also to find about his death in that manner.

I am proud to be related to John---his Dad Frank was my mom Mari McDonald Peterson were first cousins. I will never forget attending John's funeral and the 21 gun salute; his death impacted me greatly and I am so sorry he died too soon for us to get acquainted on this side. I would have loved to have known him better but want him to know he still loved and not forgotten. 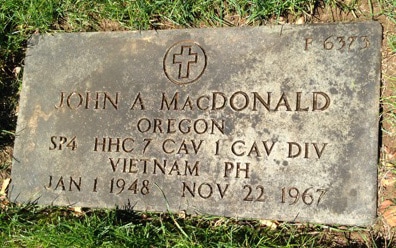