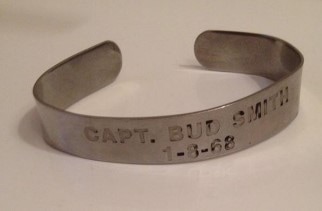 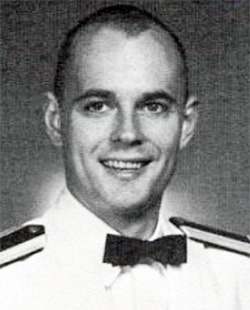 Major Bud Smith remains listed as Missing In Action, to this day. As of this writing (2016) Bud Smith’s remains have yet to be recovered. However, his navigator’s remains were recovered and identified using DNA matches, in 2006.

The Oregonian, Thursday, December 25, 1968
Fliers Thought Prisoners of VC
These are dark days for Mrs. Robert W. Stanley of West Linn and Mrs. Hallie (Bud) Smith of Portland, whose husbands are believed to be prisoners of the Viet Cong in South Vietnam.
Capt. Stanley was shot down April 1, 1967; Capt. Smith on Jan. 8, 1968.
Capt. Smith was born and reared in the Portland area, graduated from Milwaukie High School, then from Lewis and Clark College in 1963, got his commission at Officers Training School Feb. 4, 1964, was married Feb. 8, then went on to pilot training.
“Our marriage was inevitable,” Mrs. Smith said, with her first real show of laughter. “My maiden name was Smith when we went to Lewis & Clark together and they called our names together whenever they took roll.
“Bud got his wings in October, 1964. Then we had two wonderful years together in England,” Mrs. Smith recalled.
They have no children.
…Capt. Smith was flying an unarmed plane on a low-level reconnaissance mission in the highlands east of Da Nang Jan. 8, 1968, just before the Tet offensive.
As he dropped down for his photography run his plane disappeared from the radar and radio contact was lost. Three days later a party of Marines found the wreckage of his plane, but no sign of Capt. Smith or his navigator, no parachutes and no sign that they went down with the plane.
“Bud has a will to live that will keep him going,” his wife said. “I’ve never known Bud to give up on anything. He has a lot to live for.”
Every month the waiting wives send a typed single-page letter to their husbands, addressed to Madame Binh, the Viet Cong representative at the Paris peace talks, with a note asking her to see that the letter is forwarded to their husbands.

The Milwaukie Review, Wednesday, January 2, 1974
MIA’s wife reminds Legion many still missing in Vietnam
Mrs. Judy Smith, wife of Capt. Bud Smith, Milwaukie, who is missing in action in Vietnam, spoke to members of the Milwaukie American Legion Post and Unit.
Mrs. Smith, who was accompanied by another MIA wife, Darlene Schorn, in February of 1970 visited with North Viet Nam officials.
Mrs. Smith told the Legion that wile 590 Prisoners of War had been returned, more than twice that number are still unaccounted for in Vietnam. Twenty-nine of these men are from Oregon, including Capt. Smith, said Mrs. Smith.
According to Mrs. Smith, her husband’s airplane wreckage, like many others, was found with no trace of bodies or survival equipment. Mrs. Smith indicated that the Defense Department concludes these men were captured, yet there is no word from Hanoi concerning them.
The MIA captain’s wife urged that members write to their congressmen and the President, asking them to continue investigating the fates of these men. Phyllis Corley, national security chairman for the Milwaukie unit, said the wearing of MIA bracelets serves as a constant reminder that there are more than 1,200 missing in action, whose names appear on no list from Hanoi either dead or alive.
Mrs. Smith was presented with an honorary membership in the Milwaukie Unit No. 180.