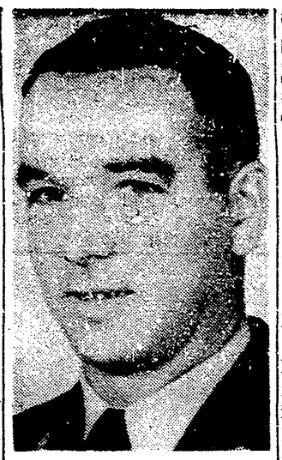 Donald Tovey is the most senior of the Clackamas County fallen. Over his life his residences included Estacada, Portland, Utah, and Texas. The Oregonian posted a pair of stories describing Tovey’s request for a sewing machine to be donated to his Army unit.

Burial location: Willamette National Cemetery, Portland, Oregon
Memorials: Vietnam Veterans Memorial (Washington, DC), Oregon Vietnam Veterans Memorial (Portland)
​
The Oregonian, Tuesday, November 29, 1966
GI Requests Sewing Gear
Mayor Terry Schrunk has received an appeal from a Portland man serving with the Army in Vietnam. The soldier, SFC Donald L. Tovey, said his division is in serious need of a sewing machine.
Action in the field, Tovey indicated, is rough on uniforms and the machine is needed for basic repairs and for sewing insignias and patches.
Included in Tovey’s appeal, according to the mayor’s office, was a story from an Army newspaper describing the response by a Texas community when a similar request was made by one of its native sons. They contributed five sewing machines.
“I know that the State of Oregon is better and smaller than Texas and I think they will do as much if not more for servicemen from Oregon,” said Tovey.
Anyone interested in responding to Tovey’s request may notify the mayor’s office.

The Oregonian, Friday, December 30, 1966
Oregon GI in Vietnam To Get Sewing Machine
Army Spec 1C Donald L. Tovey, 37, now serving with the First Cavalry in Vietnam, will get his sewing machine.
Tovey, who calls Portland home, wrote Mayor Terry D. Schrunk last October that his unit needed a sewing machine to stitch on all those badges the military considers so important.
After reading about Tovey’s request in The Oregonian, the Military Order of the Cooties, Pup Tent No. 1, came through with a reconditioned portable.
Thursday morning, Cootie Seam Squirrel Dudley Lamphan presented the machine to Schrunk while Tovey’s brother, Floyd, looked on.
Tovey explained that his brother is a career Army man, has a wife and family in Coppers Cove, Tex., but still thinks of himself as an Oregonian. In one of Tovey’s letters from An Khe, Vietnam, he told Schrunk that when his hitch is up he and his family will return to Portland.
There was one little side note: The machine comes complete with a spool of pink thread.
Article includes a photo of Lamphan, Mayor Schrunk, and Floyd Tovey.


The Gatesville Messenger and Star-Forum (Gatesville, Texas), Friday, May 19, 1967
Cove Soldier Cited for Heroism
U.S. ARMY, VIETNAM – For heroism in combat, Sergeant First Class Donald L. Tovey received the Army Commendation Medal in Vietnam April 21. He is the husband of Mrs. Renee Tovey of Copperas Cove.
Sgt. Tovey was serving as a gunner aboard an armed helicopter last Sept. 16 on a mission to locate and extract the crew of a helicopter shot down near Bong Son. Nearing the site of the crash, the aircraft came under fire from a village.
As the exact location of an enemy position could not at first be determined, Sgt. Tovey leaned far out to spot it, exposing himself to hostile fire.
Finding the source of the fire, the sergeant engaged the position with his machine gun and, with tracer fire, pinpointed its location for another helicopter.
A platoon sergeant in the 1st Cavalry Division, he has been in Vietnam since last August.


The Daily Herald (Provo, Utah), Tuesday, July 15, 1969
Last Rites Slated for Viet Victim
OREM – Funeral services for Sgt. Donald L. Tovey, 39, former resident of Orem, will be Thursday at the Mt. Scott Funeral Home in Portland, Ore. Sgt. Tovey died July 2 in Vietnam. Officials of the Defense Department stated that he died in Vietnam “not as a result of hostile action.” He was serving his second tour of duty at the time of his death.
He was born Dec. 28, 1929 in Portland, Ore., a son of Floyd and Minnie Viola Tovey. He married Renee McKelvey on Oct. 13, 1954. She is originally from Orem and lived here for a time prior to their marriage.
Surviving are his widow and four children, Brenda, 11; Jerald and Terence, 9; and Michelle, 4, all of Copperas Cove, Tex. Also surviving are four brothers and one sister.
Burial will be at the Willamette National Cemetery in Portland, Ore.


The Oregonian, Thursday, July 17, 1969
SGT. D.L. TOVEY
Funeral for Sgt. 1.C. Donald L. Tovey, Portland soldier who was killed in action in Vietnam, July 2, will be Thursday at 1 pm at the Mt. Scott Funeral Home. Burial will be at Willamette National Cemetery.
Sgt. Tovey, who was a helicopter mechanic in Vietnam, was in the Army for nearly 20 years. He was born Dec. 29, 1929 in Portland and was educated and spent his early life in Estacada.


The following remembrances were originally posted here: http://www.vvmf.org/Wall-of-Faces/52413/DONALD-L-TOVEY
We Still Remember and miss you
I still remember meeting you when we moved to Copperas Cove and you were stationed at Fort Hood. We lived next to the "Mighty Mouse" drive in and my sisters and I used to play with the twins and your daughter. It was a very sad day when you had received orders and leaving and even sadder when we had learned of your death. You have missed many things after your passing but I want you to know that we still remember you, miss you and are thankful for your service.
************************************************************
Always in my thoughts
I wish I would have gotten the chance to meet you. Grandma always spoke very highly of you. I know she still loved you dearly. I hope you two are together now. Love always.