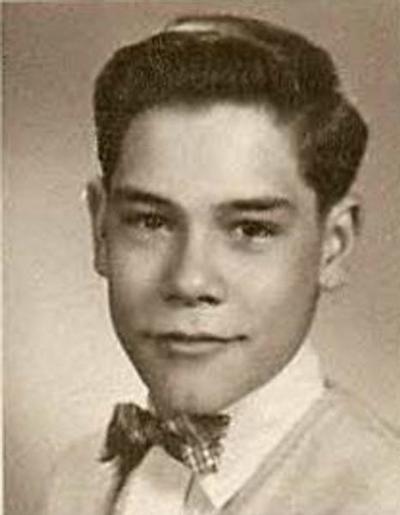 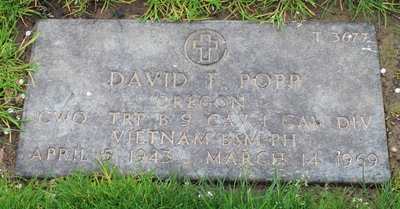 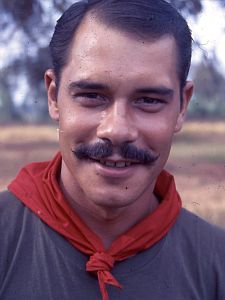 A detailed description of the crash can be found here: https://www.vhpa.org/KIA/incident/69031444KIA.HTM

The Oregonian, Thursday, April 10, 1969
Wives of Servicemen Planning Tea
Mrs. David Popp will become chairman of the Wives of Overseas Servicemen organization at a Saturday, April 12, 2 to 4 p.m. informal tea planned for Red Cross headquarters, 4200 SW Corbett Ave.
The organization, now in its fourth year, is open to the wife of any enlisted man serving outside the continental United States, including Alaska. Activities of common interest are planned.
Mrs. Popp’s husband is a helicopter pilot with the First Air Cavalry and missing in action. Outgoing president, who will also be honored at the tea, is Mrs. Dudley Strong. Sgt. Strong, who recently returned from a tour of duty in Korea, will speak at the tea.
The club is sponsored by the Oregon Trail Chapter of the Red Cross.


The Oregonian, Saturday, January 31, 1970
Service for Chief Warrant Officer David F. Popp, 26, will be at 2:30 p.m. Sunday at the Mt. Scott Funeral Home.
CWO Popp died in action when his helicopter went down in Tay Ninh, Vietnam, near the Cambodian border. Prior to his Vietnam duty he had served as a paratrooper in Germany for three years.
After his discharge from service in Germany he spent three years as a civilian and then re-enlisted.
CWO Popp was born April 5, 1946, in Mansfield, Ohio, and came to Oregon with his parents at the age of 2.
He is survived by his wife, Coralee, and daughter, Cynthia. Other survivors include his parents, Mr. and Mrs. Fred Popp of Portland, and four sisters: Nancy Galat; Maryanne Bares; and Betty Popp, all of Portland; and Ruth Sage of Tacoma, Wash.
Interment with full military honors will be at Willamette National Cemetery.