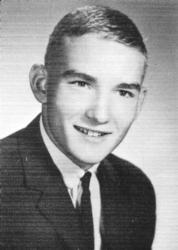 ​David Jr. is buried next to his father at Willamette National Cemetery.


The Oregonian, Thursday, June 2, 1966
Oswego Man Killed in War
The death in Viet Nam of Marine PFC David B. Brandon Jr., 19, son of Dr. and Mrs. David B. Brandon Sr., 1350 SW Ridge Crest Lane, Lake Oswego, was announced by the Defense Department Wednesday.
Brandon was the 42nd Oregon man to be killed in the war since Jan. 1, 1961, and the 38th in combat. He was the 28the Oregon man killed in 1966.
He was graduated from Lake Oswego High School in June, 1964, and for a brief time attended Multnomah College. He worked in Oregon and California before joining the service in September, 1965. He was a member of Demolay.
He is survived by his parents; maternal grandparents, Mr. and Mrs. William Proehl of Lake Oswego; sister Judy, 18, who attends Oregon State University, and brother John, 11, a student at Uplands Grade School, Lake Oswego. His father is a dentist.
Brandon had been serving in Viet Nam since the latter part of February. The family said the funeral is expected to be in about 10 days.


The Oregonian, Thursday, June 9, 1966
PFC DAVID BRANDON JR.
Funeral service for U.S. Marine Corps PFC David B. Brandon Jr., 19, of Lake Oswego, will be held at 10 a.m. Thursday in Christ Episcopal Church, Lake Oswego, followed by burial in Willamette National Cemetery. Private First Class Brandon, 19, was killed May 29 in Viet Nam.
A memorial fund has been established in his honor at the Christ Episcopal Church.