The Oregonian, Wednesday, May 19, 1965
West Linn TYV Champ: Lions in Playoffs, Nip Vikings, 1-0
Kaufman and Dugdale each struck out eight, but Kaufman walked none, while Dugdale allowed two base on balls. Only West Linn hits were singles by Dale Tolbert in the first and Dave Bloye in the sixth.

Football
Dale William Tolbert was known to his friends as Rusty. He was about 10 years older than me and took a liking to a little kid in the neighborhood. He made sure I got to run the ball in the touch football games we played on Buck street a lot of evenings and weekends. He had a younger brother named Jerry and they lived with his parents about four doors from my family. I remember all his relatives that were in town during his funeral. I seem to recall he wanted to join the Navy but his father had fought in a previous war, Korea or WWII and felt he should be Army. I still think of him often. 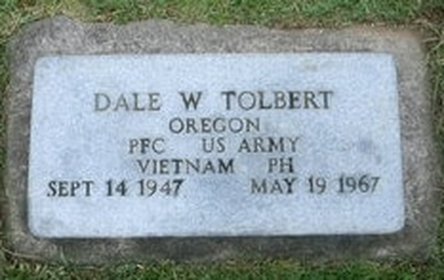