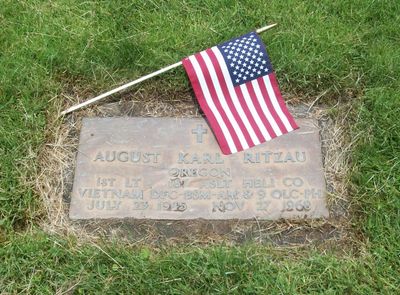 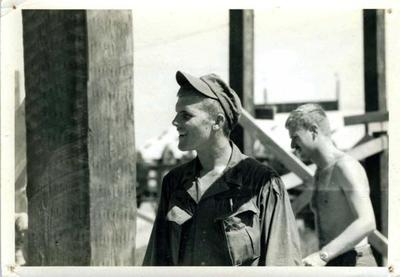 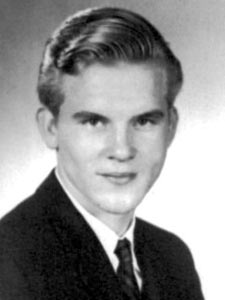 Friends called him “Auggie” or “Karl”.

The Oregonian, Thursday, December 5, 1968
Lieutenant Dies In War
WASHINGTON (AP) – The Defense Department reported Wednesday that Army 1st Lt. August K. Ritzau of Clackamas, Ore., was killed in action in Vietnam.
The department said Ritzau had been earlier listed as missing.
He was the son of Sylvia K. Ritzau of Clackamas.
His was the 391st death of an Oregon serviceman in the Vietnam war since 1961 and the 192nd this year.

This remembrance was originally posted here: http://www.honorstates.org/index.php?id=294950
I served with Karl at the time of his death. He was an outstanding officer and was on track to being a fine commander. I flew lead in the flight the day he was killed alongside exceptional men. I chronicalled that day in my book "Crusader 23". Tom Tesmar
These additional remembrances were originally posted here:
http://www.vvmf.org/Wall-of-Faces/43592/AUGUST-K-RITZAU

Friend Auggie
Well you never made it to Ft. Bragg, had to go to flight school instead. Every time I drive by Ft Lewis I think of you and your Mustang convertible. I still see Roy. Rest in peace.
********************************************************************
November 27, 1968 - Crusaders Under Fire
There are three accounts for what occurred November 27, 1968. (Editor’s note – you can read more of this remembrance at the link shown above.)
I was there when Karl died.
Karl Ritzau, as we knew his name, was relatively new in the unit but already was shaping up to be a great pilot and commander. I was the Senior Aircraft Commander of the platoon and he was the platoon leader. There is a full account of his contributions in my book "Crusader 23, I'd Rather Be Lucky Than Good" www.blurb.com. I wrote the book, in part, to honor all of those men, like Karl, who never lived long enough to tell their own stories. Karl flew his last mission despite the fact that he had been wounded in his left wrist in an earlier assault. I talked with him just before we departed for the last mission of the day and my last mission in Vietnam.
​
​